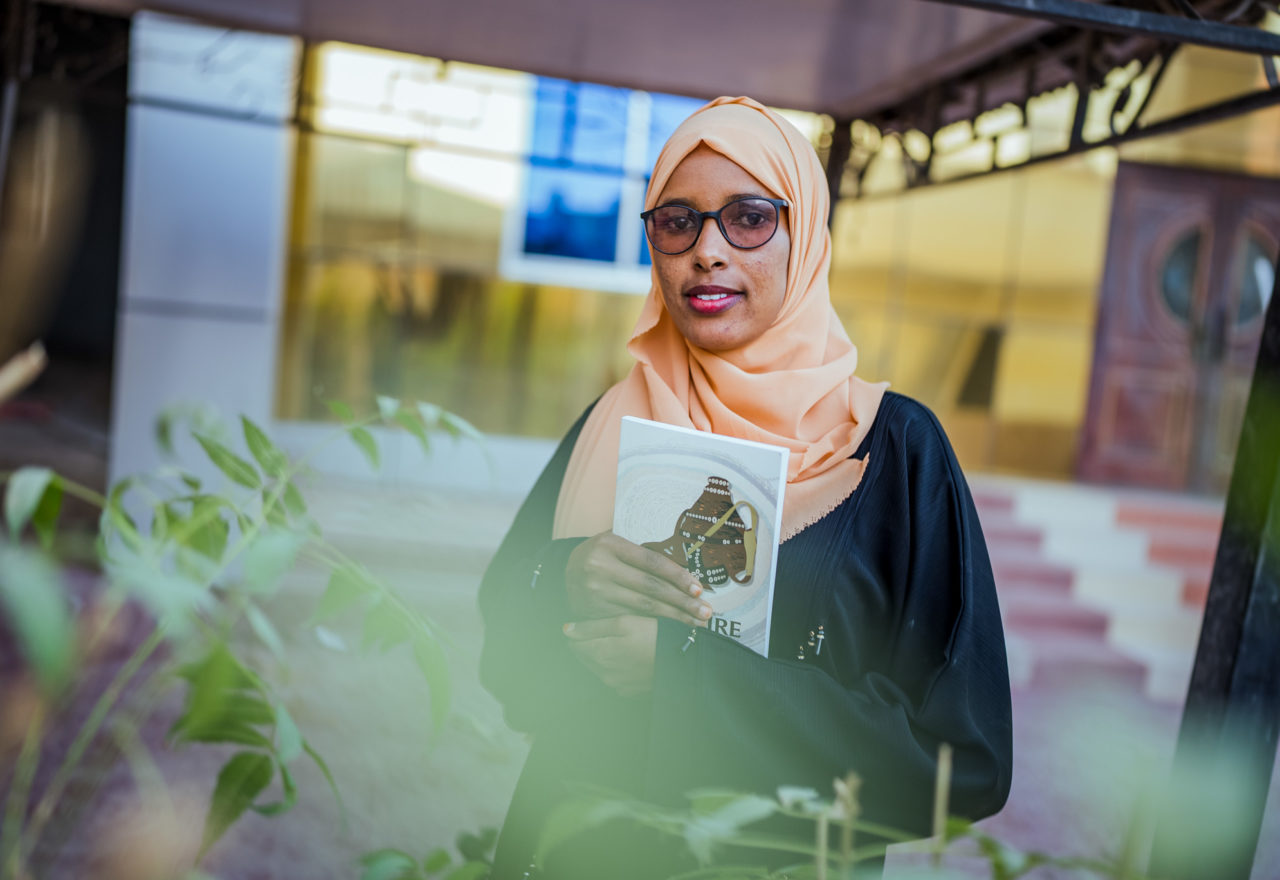 Raxma Xuseen Huriye fell in love with poetry at a young age, she would sing to herself about everything but was always shy of sharing her poems with other people except her family.

“I come from a family of poets and grew up in the countryside,” said the 26-year-old award-winning poet. “My family would listen to me and correct me if I got the verse wrong.”

In 2013, she moved to the city of Hargeisa, where she met new friends and other female poets who share their poetry on social media. She soon began posting her poems on Facebook and eventually became brave enough to perform in front of an audience.

“Facebook gave me the courage to share my work with the public. I feel comfortable because the readers cannot see me and I cannot see them too,” she said. “I get motivated when I see positive comments and people talking about my poems on their pages.”

Although life in the city provides her with opportunities and a sense of freedom, she still has to tread carefully to find a space in a conservative society which disapproves of women who speak up in public.

“It is not easy for women to speak up freely like men, we have to be careful about culturally-sensitive issues and even expressing normal stuff in an unacceptable way. It is a fine balance, which can be achieved through collaboration and active community engagement,” she said.

In September, she teamed up with two of her friends to organise a special poetry event featuring all-women poets.

“Each one of us performed three poems and we invited two well-known male poets to join us on the panel and help with the discussions and answering questions. Over 100 people came to the event. It was the first time I performed in front of a large audience,” she said. “For us, it was more than just showcasing our poetry; it was a way of showing our strength and leadership skills,”

It was the success of that event which gave her the confidence and courage to enter the Hoyga Maansada annual poetry awards. And much to her surprise Raxma won the Woman of the Year award for her poem about unity and the importance of preserving Somali culture.

The following lines are from her winning poem:

If the solidification of our nation and leading of our lives

Is abandoned easily and our unity dispelled

We will have our existence uprooted, our seed gone for good

Our origins will vanish from memories

The winners of the competition which ran for a month, was announced at a ceremony held in Mogadishu on 22 November.

“I never imagined that I would win such highly acclaimed award!” she said. “I first wanted to apply for the top category, which was open for both men and women, but then I thought I had a higher chance in the women’s category, since there are not as many women poets.

“I have been overwhelmed by messages from family, friends and the public since the results were announced. My Facebook is flooded with hundreds of messages congratulating me for the award.”

The Home of Somali Poetry initiative, which is supported by the United Nations Development Programme (UNDP), recently launched its website, which hosts a growing archive of Somali poetry and an online magazine for poetry-related news and articles, live performances and online resources. The initiative aims to use the power of poetry to promote peace and human rights.

“The Home of Somali Poetry initiative is giving a platform to a new generation of poets while at the same time encouraging and preserving classic Somali poetry through a comprehensive online archive,” said Osman Abdullahi Guure, who was one of the judges of this year’s awards.

Raxma wants to use her new-found fame to amplify her voice and inspire other women poets who need a role model to follow suit.

“There are many great women poets who have great stories to tell but do not have the courage to speak up, so I want to use my influence to empower them and help them share their hidden talents,” she said.